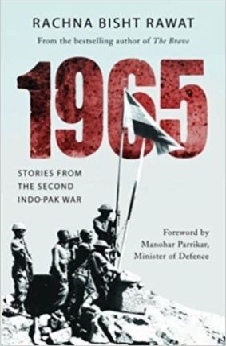 1965: Stories From The Second Indo-Pakistan War

Fifty years ago, in April 1965, skirmishes between border police broke out along the Indo-Pak frontier. Despite attempts at peace, by August, the two countries were involved in a conflict that saw thousands killed and wounded.

The Indo-Pak War of 1965 has gone down as a landmark in Indian military history. It saw Indian soldiers going up against a technologically better-equipped Pakistani Army, and still pulling off astounding victories. It saw near-unbelievable displays of courage, and it made heroes out of men as diverse as an ex-tailor and an Anglo-Indian born in the UK.

In 1965: Stories From the Second Indo-Pak War, Rachna Bisht Rawat chronicles some of the stories of the Indian soldiers of 1965. The narrative centres round five battles that marked the war. Stretching from Kashmir to Punjab, these battlefields were as diverse as jungles, mountains and sugarcane fields. In all, Indian soldiers proved themselves equal both to the enemy and the terrain.

The five battles?Haji Pir Pass, Asal Uttar, Phillora, Barki, and Dograi?are covered in a long chapter each, which explains the background before going into the details of the military units deployed, the strategy, and the action itself. The entire course of the battle is covered, with significant events being highlighted?a particular victory, a loss, a surprise twist, an amusing anecdote. Each chapter, too, includes descriptions of particularly noteworthy acts of valour that earned men recognition (or, in some cases, not: at the Battle of Asal Uttar, three grenadiers, Shafiq, Naushad and Suleiman, shot dead a Pakistani GOC?probably the only foot soldiers ever to have killed a General in battle).

While the detailed descriptions of the battles may not appeal to readers uninterested in military history, what makes this book memorable are the stories of these men. Each chapter ends with a long section on one man who exemplified courage in that battle: CQMH Abdul Hamid, for example, who destroyed seven Patton tanks at Asal Uttar before being killed. Or Lt Col Ardeshir Burzorji Tarapore, whose courage and hands-on attitude won him the undying respect of his men.

Dotted with reminiscences of veterans, of relatives and widows who lost their men in these battles, this book brings alive the men who fought the battles of 1965. They, and the anecdotes that appear here and there, are what make this book not just a commemoration of 1965, but more: an affectionate, warm tribute to these men. There is pathos here, of course, and bravery, even humour. There is a glimpse of the other side of battle: the days of trudging through rain and mud, the lack of sleep and water. Of surviving on sugarcane for six days because there was no other food. Of villagers helping out with food and friendship (or, in one ironic incident, Pakistani villagers not realizing that the tanks rolling down their village lanes were Indian, the soldiers in them the enemy).

General Patton once said, ‘Wars may be fought with weapons, but they are won by men’. 1965: Stories From the Second Indo-Pak War is a worthy tribute to those men who may not have won us the war (ceasefire was declared late in September 1965), but who showed us what soldiering is about.

Be the first to review “1965: Stories From The Second Indo-Pakistan War” Cancel reply