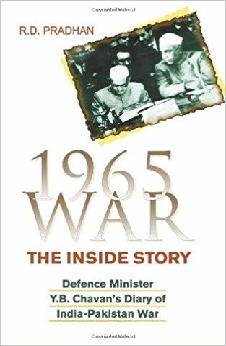 1965 War was the first all-out clash between the two nationsIndia and Pakistan, after the Partition in 1947. Y.B. Chavan, Indias former Defence Minister, recorded in his own hand the 22-day war. The inside story reveals: Utter failure of intelligence on timing of Pak attack. How and why Chavan ordered IAF to launch attack without even informing the PM. Why India attacked across the international border? Reasons as per Chavan recording, If we failand I cannot even imagine of itthe Nation fails. How a Division Commander bolted from the theatre of operation. How the Army Commander sacrificed over 300 men for the Greater Glory of his Regiment. Why the Indian Army did not march into Lahore. Occasions when the Army Chief almost lost his nerve. How the Defence Minister, the Army and Air chiefs worked as team. How PM kept his cool and emerged as a great leader in War. Was it a Futile War? Did India lose in Tashkent what was won on battle-fields. Finally, how the political leadership re-established its proper relationship with the defence forces leadership and wiped out bitter memories of the 1962 India-China War. The book is a tribute to the IAF that was deployed in war for the first time after the Independence. Also to Indias armoured Regiments that fought valiantly and destroyed myth of superiority of the Pattons.

1965 War, The Inside Story Reviews