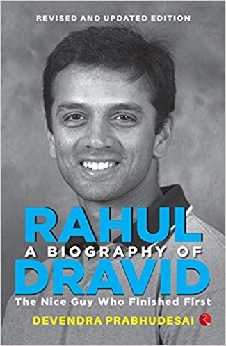 A Biography Of Rahul Dravid: The Nice Guy Who Finished First

Rahul Dravid, one of the greatest cricket players the game has seen in its entirety, lived by three D’s that got him to where he is: determination, dedication and discipline. The biography of Rahul Dravid written by Devendra Prabhudesai encompasses the life and times of the great player. It throws light on his trials and tribulations, wins and losses and other elements that shaped his glorious cricketing career. How he came to be an inspiration to so many young and aspiring cricketers who look up to him till date.

Rahul Dravid is known to be a humble person in his game as well his countenance, never letting the public critique or the fame get to his head. The innings he played in his entire career has been magnificent and Prabhudesai does complete justice to his journey. He was the first Indian to score five double centuries in test cricket and four centuries in a consecutive four test innings. His career might have been overshadowed by the success of Sachin Tendulkar but it was not enough to bring his spirits down and he continued to play his best.

Being the first batsman to have scored a century against every country that played test matches, Dravid outdid himself continuously in his career. As a tribute to one of the greatest batsman the nation has witnessed, Rahul Dravid is the story of a man who never once lost his composure because of competition and gave the Indian cricket team their best years.

Be the first to review “A Biography Of Rahul Dravid: The Nice Guy Who Finished First” Cancel reply