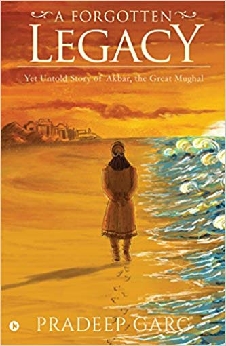 A Forgotten Legacy (Yet Untold Story Of Akbar, The Great Mughal)

A biographical fiction firmly grounded in the contemporary historical records, travelogues and literature, it is the story of Akbar, the Great Mughal, enchantingly told and from a fresh angle. All the events are historical, and so are all the characters. And by way of extensive notes and annexure at the end, the book not only authenticates its assertions but also exposes attempted distortions of history and image of a man who comes closest to the philosopher king of Plato.

Akbar was a thinking man who made every idea and belief subservient to reason. And guided by his rationalism, he heralded Renaissance in Hindustan and took up an agenda of educational and social reforms many centuries before Raja Ram Mohan Roy would do. In fact, what modern India is today ? an open, tolerant society and a nation ? we owe it to him, the book amply illustrates.

Be a part of this exciting, emotional journey. Have a glimpse of Akbar’s tormented childhood, his fearful and uncertain adolescent years, his romances, his daredevilry on battlefields; and enjoy his lively interactions with all the ‘Navratnas’, particularly Birbal. Be his companion in the spiritual quest; get enraptured by the passionate debates of Ibadat Khana brought alive; dive deep in the profound discussions with philosophers; trace his evolution as an enlightened man and the only secular ruler of the times; follow his struggle to realize a vision of modern, progressive Hindustan; and witness from close quarters his personal life as it unfolds ? a life of love, friendship and loss.

Be the first to review “A Forgotten Legacy (Yet Untold Story Of Akbar, The Great Mughal)” Cancel reply