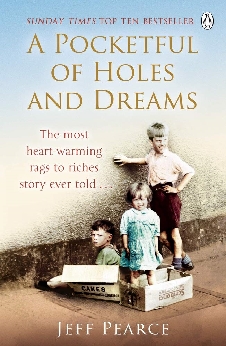 A Pocketful Of Holes And Dreams

The poor boy who made his fortune . . . not just once but twice.

Little Jeff Pearce grew up in a post-war Liverpool slum. His father lived the life of an affluent gentleman whilst his mother was forced to steal bread to feed her starving children. Life was tough and from the moment Jeff could walk he learned to go door to door, begging rags from the rich, which he sold down the markets.

Leaving school at the age of fourteen, he embarked on an extraordinary journey, and found himself, before the age of thirty, a millionaire.
Then, after a cruel twist of fate left him penniless, he, his wife and children were forced out of their beautiful home . . .

With nothing but holes in his pockets, Jeff had no alternative but to go back down the markets and start all over again. Did he still have what it took? Could he really get back everything he had lost?

A Pocketful of Holes and Dreams is the heartwarming true story of a little boy who had nothing but gained everything and proof that, sometimes, rags can be turned into riches . . .

A Pocketful of Holes and Dreams Reviews