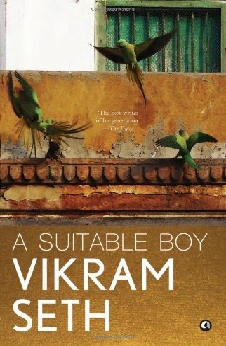 The book covers an engaging story that is set in the post-independence India. The story unfolds through four middle class families?Mehras, Kapoors, Khans and Chatterjis. It also describes India’s caste system that has four main classes, which are further based originally on personality, profession and birth.

However, the main plot of the novel revolves around Lata Mehra, a university student, who is under pressure of her mother Rupa and brother Arun for getting married. Her family is looking for a ‘suitable boy’ who could meet the standards set by her family. After explaining the life of Lata and people around her, the plot shifts to the suitors named Haresh, Amit and Karan, who come to meet Lata.

The novel highlights how marriage in India becomes a family affair, where all members of a family play considerable parts. It also focuses on typical problems that were faced by India soon after independence. Some of the major issues mentioned in the book are tensions between Hindus and Muslims, empowerment of women and the zamindari system.

Divided into 19 parts, each chapter in the book is about different characters which keep inter-relating the stories and, at last reach, to one conclusion. For instance, in the beginning the book covers Lata’s life and proceeds further to explain about Maan Kapoor, a sex worker. The third story is again about Lata, whereas the fourth one focuses on Haresh’s life. The author has beautifully explained and intertwined the lives of all the characters in an extraordinary manner.

Regarded as one of the classic examples of Indian Literature in English, A Suitable Boy, at around 1500 pages, remains to be one of the lengthiest novels ever published in English language in a single volume.

Be the first to review “A Suitable Boy” Cancel reply