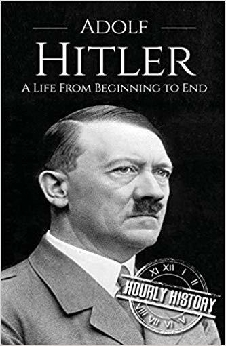 Adolf Hitler: A Captivating Guide To The Life Of The F?hrer Of Nazi Germany

Explore the Rise of Adolf Hitler

Was Hitler, as Ian Kershaw asked, a natural consequence of German history, or an aberration? Not that Hitler had been in hiding, waiting to attack. The F?hrer had actually been following an aggressive and savage foreign policy for almost ten years and been named Man of the Year by Time magazine in 1938.

This is not a book about World War II, but about the man, Adolf Hitler, one of the faces and names that still arouse the strongest feelings?repulsion, resentment, and even fanaticism?but one who also had a childhood and a youth, a father, and a mother. It is the road to madness?beginning that day in August of 1934 when he took over absolute power and ordered allegiance and loyalty to him alone?that this book is about.

Some of the topics covered in this book include:
Hitler’s Origins
His Inception
The anti-Semitic capital of Europe
Munich
First World War
Hitler’s Ascension
Mein Kampf
His Downfall
The remains of Adolf Hitler
And a Great Deal More that You don’t Want to Miss out on!
Scroll to the top and select the Add to Cart button now to learn more!

Be the first to review “Adolf Hitler: A Captivating Guide To The Life Of The F?hrer Of Nazi Germany” Cancel reply