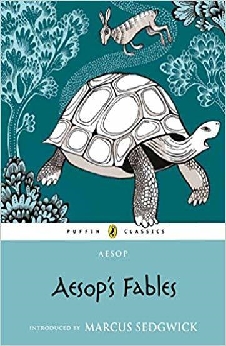 Aesop’s Fables (Puffin Classics) is a collection of over two hundred popular animal tales from ‘The Boy Who Cried Wolf’ and ‘The Dog in the Manger’ to less familiar fables, each story ending with a sharply pointed moral in the true characteristic of Aesop’s Fables. Many of the stories used in the book gives a moral lesson by using an amazing setting that hide the impact and allow them to be applied on even unsuspecting short human beings.

Many of the tales that have been covered in the book are so popular that they have given us the well known phrases that are used by us in our daily lives such as the story of the Fox and the Sour Grapes. However, even the less famous tales in the book seem familiar, as the morals that are attached to them are actually based on universal truths. from stories like the Tortoise and the Hare, the Boy Who Cried Wolf and the Treacherous Partridge to Big and Little Fish, Aesop’s wise and foolish animal characters in have always been a great delight for readers.

Aesop’s fables are an integral and popular tradition in European culture, even though they were first written around two millennia ago. His legendary collection of stories became the source of the collections of verse, fables and prose that are scattered throughout Roman and Greek literature.

Be the first to review “Aesop’s Fables” Cancel reply