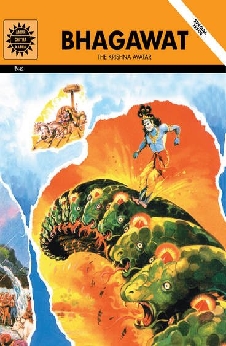 The Bhagawat Purana tells of the ten incarnations of Vishnu and is the most popular of the Puranas. This Special Issue describes the events of the tenth canto which narrates the life of the most beloved god in Hindu mythology – Krishna. Beginning with the miraculous birth of Krishna, the story traces his childhood exploits, including the slaying of dangerous demons and the performing of miraculous acts. The comic also describes Krishna’s battle with Kamsa as he retrieves the kingdom of Mathura for his aging grandfather, Ugrasena. In the Bhagawat, Krishna is seen as a son, brother, husband, friend and warrior.