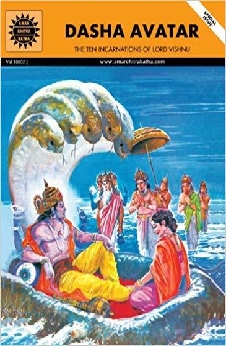 The Avatar concept is the very cornerstone of Hindu theology. According to it, the Supreme Power manifests itself in animal or human forms on earth, with the divine mission of cleansing it of the periodically increasing evil. The Avatar concept is closely related to the measurement of time in Hindu theology which has its basis on one working day of Brahma. According to the Bhagwat Purana, Brahma, the creator, is the causal effect of the predetermined periodic creation and dissolution of the universe. Each creation or Kalpa is equal to one day and each dissolution or Pralaya is equal to one night in the life of Brahma. A Kalpa and a Pralaya last for 4,320 million human years each. Every Kalpa has 1000 cycles of 4 Yugas (ages). Each cycle of 4 Yugas is completed in 4,320,000 human years. The Yugas are called Satya, Treta, Dwapara and Kali. The Avatars which are considered most significant are ten in number and they form the ‘Dasha Avatar’. These ten avatars start with the form of a lowly fish and work up to the noble man, cast in the image of God. The fanciful find a parallel to Darwin’s theory of evolution in the progression of these Avatars. The Avatars enable the common folk to speak of or listen to stories of divine doings which is a simple way of proceeding towards Godhead; particularly in our Kali Yuga with its ‘sick hurry and divided aims’.