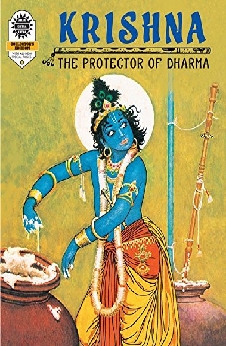 Playful cowherd, supreme intellectual, the ultimate romantic Krishna, one of the most loved gods of Indian mythology has a myriad forms with which he reaches out to his devotees. Here are five enthralling stories that tell of this invincible deity. Stories of him as a child, mischievous, bubbling with enthusiasm and plunging from one escapade into another, as a lover who woos and elopes with the beautiful Princess Rukmini, as a man defending his honor after being wrongly accused of stealing the Syamantaka gem, as a friend of the Pandavas who tells them how to defeat the powerful Emperor Jarasandha and as the vanquisher of the demon Narakasura who symbolizes all the forces of evil.

Be the first to review “Amar Chitra Katha – Krishna: The Protector Of Dharma” Cancel reply