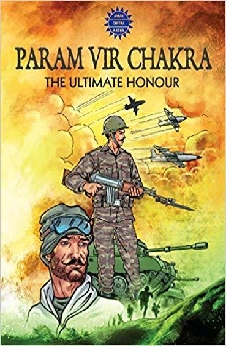 Amar Chitra Katha tells the stories of 21 fearless heroes, for whom their lives were less important than the sovereignty of India, and the safety of their fellow citizen. 21 stirring tales of bravery, courage and sacrifice, that need to be told and remembered, as an inspiration for generations to come.
The Param Vir Chakra is the highest decoration of valor in wartime, recognizing the immense courage and sacrifice of the Indian Armed Forces. The men who have been awarded this ultimate honor displayed indomitable courage and selfless devotion to duty, while defending the borders of our nation.