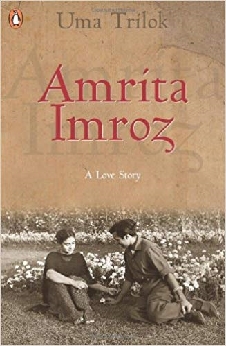 “When I wrapped myself with your being our bodies turned inwards in contemplation Our limbs intertwined Like blossoms in a garland Like an offering at the altar of the spirit Our names, slipping out of our lips, Became a sacred hymn . . . ” (from Adi Dharam by Amrita Pritam).

Acclaimed as the doyenne of Punjabi literature, Amrita Pritam received many awards, including India s highest literary award, the Jnanpith, in 1981.

Born in Gujranwala, now in Pakistan, in 1919, she came to India after the partition of the subcontinent in 1947. Her best-known work is a classic poem, addressed to the great eighteenth-century Sufi poet Waris Shah, in which she laments the carnage of Partition and calls on him to give voice from his grave.

Amrita met Imroz, a well-known artist, in the 1960s and they became lifelong companions. They stayed together for more than forty years, till her death, after a long illness, in October 2005.

“Amrita Imroz: A Love Story” offers living glimpses of the sacred hymn of Amrita Pritam and Imroz s life together. Uma Trilok had the rare opportunity to witness their remarkable love story and the passionate bond that they shared for so many years.

In this moving tribute she communicates her sense of deep wonder at their unique and unconventional relationship, as also her profound admiration for the creative energy of these two extraordinary individuals.

Be the first to review “Amrita – Imroz: A Love Story” Cancel reply