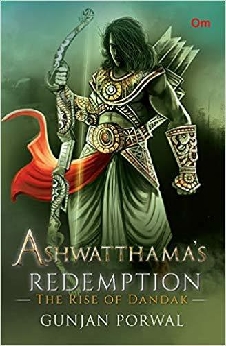 Over a hundred years after the Mahabharata War, an ancient power threatens to destroy the new Age of Men, by establishing the Age of Terror of the asuras, long believed to be extinct. the only hurdle in its path is Guru Dronacharya’s son, the mighty but accursed warrior Ashwatthama, who lost all his powers following Lord Krishna’s curse and who unwittingly finds himself drawn into the quest of the lost bow of Lord Rama, the Kodanda. As ghosts of the distant past return to haunt him and the line between friends and enemies blurs, Ashwatthama must fight his inner demons to emerge victorious. He undertakes a perilous journey?across the vast plains of the Ganges, to the snow-capped peaks of the Himavant where the price of failure is a fate worse than death and death is a privilege not granted to Ashwatthama.
Is this all part of Lord Krishna’s great plan? Will Ashwatthama be able to regain his lost glory?

Be the first to review “Ashwatthama’s Redemption: The Rise Of Dandak” Cancel reply