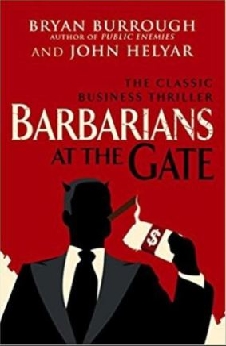 Barbarians At The Gate

Those opposed to Johnson’s bid for the company, Henry Kravis and his cousin George R. Roberts, were among the pioneers of the leveraged buyout (LBO). Kravis was the first person Johnson talked to about doing the LBO and feels betrayed after learning that Johnson wants to do the deal with another firm, American Express’s former Shearson Lehman Hutton division. Ted Forstmann and his Forstmann Little buyout firm also played a prominent role.

After Kravis and Johnson are unable to reconcile their differences, a bidding war takes place which Johnson will eventually lose. The unfortunate side effect of the augmented buyout price to the shareholders is the creation of a worrying level of debt for the company.

The title of the book comes from a statement by Forstmann, in which he calls Kravis’ money “phoney junk bond crap” and declares him and his cousin as “real people with real money,” also stating that to stop raiders like Kravis: “We need to push the barbarians back from the city gates.”

Barbarians at the Gate Reviews

Be the first to review “Barbarians At The Gate” Cancel reply