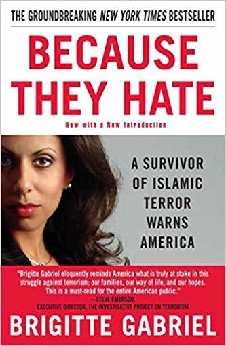 Because They Hate: A Survivor Of Islamic Terror Warns America

“Her writing is eloquent and her passion tremendous.” –Publishers Weekly.

“Brigitte Gabriel’s words should be read and studied carefully, by all the law enforcement and government officials of the West — as well as by everyone who values freedom.” — Robert Spencer, author of the Politically Incorrect Guide to Islam (and the Crusades)

Brigitte Gabriel lost her childhood to militant Islam, when militant Muslims from throughout the Middle East poured into Lebanon and declared jihad against the Lebanese Christians. Because They Hate warns that the US is threatened by fundamentalist Islamic theology in the same way Lebanon was? radical Islam will stop at nothing short of domination of all non-Muslim countries. Fiercely articulate and passionately committed, Because they Hate tells Gabriel’s personal story as well as outlines the history, social movements and religious divisions that have led to this critical historical conflict.

Because They Hate Reviews

Be the first to review “Because They Hate: A Survivor Of Islamic Terror Warns America” Cancel reply