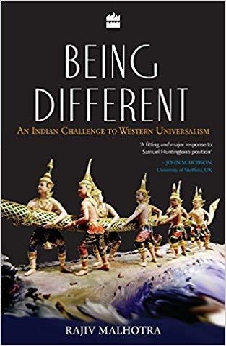 Being Different : An Indian Challenge To Western Universalism

Rajiv Malhotra’s insistence on preserving difference with mutual respect – not with mere “tolerance” – is even more pertinent today because the notion of a single universalism is being propounded. There can be no single universalism, even if it assimilates or, in the author’s words, “digests”, elements from other civilizations’ – Kapila Vatsyayan

In Being Different: An Indian Challenge to Western Universalism, thinker and philosopher Rajiv Malhotra addresses the challenge of a direct and honest engagement on differences, by reversing the gaze, repositioning India from being the observed to the observer and looking at the West from the dharmic point of view. In doing so, he challenges many hitherto unexamined beliefs that both sides hold about themselves and each other. He highlights that while unique historical revelations are the basis for Western religions, dharma emphasizes self-realization in the body here and now. He also points out the integral unity that underpins dharma’s metaphysics and contrasts this with Western thought and history as a synthetic unity. Erudite and engaging, Being Different critiques fashionable reductive translations and analyses the West’s anxiety over difference and fixation for order which contrast the creative role of chaos in dharma. It concludes with a rebuttal of Western claims of universalism, while recommending a multi-civilizational worldview.

Be the first to review “Being Different : An Indian Challenge To Western Universalism” Cancel reply