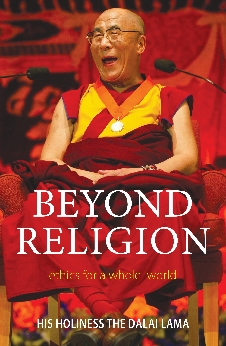 Beyond Religion: Ethics For A Whole World

In his bestselling Ethics for a New Millennium, His Holiness the Dalai Lama first proposed an approach to ethics based on universal rather than religious principles. Now, in Beyond Religion: Ethics for a Whole World, the Dalai Lama, at his most compassionate and outspoken, elaborates and deepens his vision for the nonreligious way. Transcending the mere ‘religion wars’, he outlines a system of ethics for our shared world, one that gives full respect to religion. With the highest level of spiritual and intellectual authority, the Dalai Lama makes a stirring appeal for what he calls a ‘third way’, a path to an ethical and happy life and to a global human community based on understanding and mutual respect. Beyond Religion is an essential statement from the Dalai Lama, a blueprint for all those who may choose not to identify with a religious tradition, yet still yearn for a life of spiritual fulfilment as they work for a better world.

Be the first to review “Beyond Religion: Ethics For A Whole World” Cancel reply