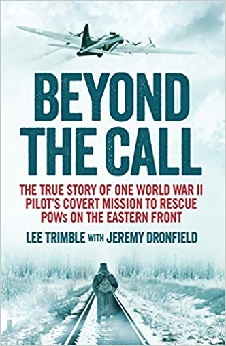 Beyond The Call: The True Story Of One World War Ii Pilot’s Covert Mission To Rescue Pows On The Eastern Front

As the Red Army advanced across Poland in 1945, thousands of freed Allied POWs – viewed by the Soviets as cowards or potential spies – were abandoned to wander the war-torn Eastern Front. In total secrecy, the OSS – wartime forerunner to the CIA – conceived an undercover mission to rescue them. The man they picked to undertake it was veteran Eighth Air Force bomber pilot Captain Robert Trimble. With little covert training, Trimble survived by wit, courage, and a determination to do some good in a terrible war. Alone, he faced up to the terrifying Soviet secret police and saved hundreds of lives, fighting his own battle against the trauma of war while finding his way home to his wife and child. Based on hours of testimony from his father, Beyond the Call is written by Trimble’s son and by British historian Jeremy Dronfield. It is a filmic, inspiring story of a hitherto unknown true hero.

Beyond the Call Reviews

Be the first to review “Beyond The Call: The True Story Of One World War Ii Pilot’s Covert Mission To Rescue Pows On The Eastern Front” Cancel reply