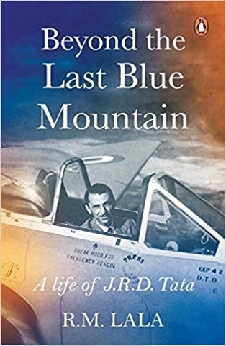 Beyond The Last Blue Mountain

Written with J.R.D. Tata’s co-operation, this superb biography tells the JRD story from his birth to 1993, the year in which he died in Switzerland.
Divided into four parts, the book explores all the most important aspects of JRD’s life. Part I deals with the early years, from JRD’s birth in France in 1904 to his accession to the chairmanship of Tatas, India’s largest industrial conglomerate, at the age of thirty-four. Part II looks at his forty-six years in Indian aviation (the lasting passion of JRD’s life) which led to the initiation of the Indian aviation industry and its development into one of India’s success stories. Part III illuminates his half-century long stint as the outstanding personality of Indian industry. And Part IV unearths hitherto unknown details about the private man and the public figure, including glimpses of his long friendships with people, such as Jawaharlal Nehru, Mahatma Gandhi, Indira Gandhi and his association with celebrities in India and abroad.

Beyond the last blue mountain Reviews