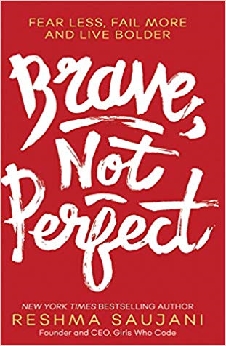 The new Lean in, from the multi-award-winning founder and CEO of National non-profit girls who code and new York Times bestselling author Reshma Saujani. Everything from this past election cycle to beyonce’s feminist Anthem speaks to this problem: women are expected to be “flawless.” Reshma Saujani was no different. She worked her way to top grades, stellar schools and blue Chip firms only to realize that the path to perfect was making her miserable. So, she did something brave and risky. She quit her job and became the first Indian-American woman to run for Congress. Fortunately, she failed epically. It was that failure that set Reshma on a journey filled with setbacks, but ultimately, immense rewards. In 2012, she founded the non-profit girls who code, with the goal of teaching 1 million girls to code by 2020 and closing the gender gap in technology. While working closely with young girls and meeting inspiring women through her widening network, she came to understand that there is a fundamental difference between how our culture socialises girls and boys. Namely, boys are taught to be brave ? to take risks, speak up, play rough and fall down trying ? while girls learn that the road to achievement is paved with diligence and caution. Some may argue that inherent biological traits encode this difference, but the truth is that the Directive comes from the outside in. In 2016, reshma’s ted talk “teach girls bravery, not perfection” struck a chord around the world, with over 3 million views. Her book, brave, not perfect, will be a manifesto that enables women to see the roots of this problem and rewire themselves ? and future generations of women ? for bravery.

Be the first to review “Brave, Not Perfect” Cancel reply