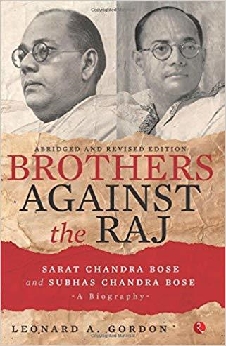 Brothers Against The Raj: A Biography Of Indian Nationalists Sarat And Subhas Chandra Bose

Subhas Chandra Bose and his brother Sarat were among the most important leaders of the Indian struggle for independence. Brothers Against the Raj is the definitive biography of the Bose brothers, placing them in the context of the Indian freedom struggle and the turbulent international politics of the period. Leonard A. Gordon uses material gathered from archives, records and over 150 interviews he conducted with the brothers’ political contemporaries and family members, as well as hundreds of unpublished letters, to bring to life once more two of India’s most controversial leaders during one of the most significant epochs in Indian history. “[A] distinguished book… Mr. Gordon is a thorough scholar…” “one of the books of the year for 1990.” “Gordon has done full justice to the Bose brothers, giving them their due and recounting their story in the context of the turbulent times in which they lived.” “Professor Gordon has… conducted exhaustive and painstaking research and put its fruits into an eminently readable book. Besides, he has skilfully put the story of their lives into the context of the complex politics of India and Bengal of their times.” “The author is a New Yorker but knows Calcutta well… The entire distinguished family seems to come alive as he writes, but he is careful to paint them with their warts intact.” “[An] extraordinary, informative, and insightful study of Subhas and Sarat Bose.” ” I have found the book informative and absorbing. [ Gordon has] managed to combine empathy with objectivity- not an easy feat.”

Brothers Against the Raj Reviews

Be the first to review “Brothers Against The Raj: A Biography Of Indian Nationalists Sarat And Subhas Chandra Bose” Cancel reply