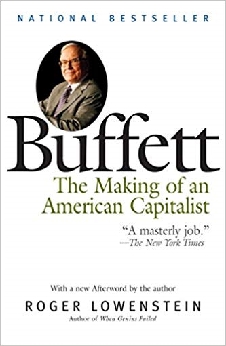 Buffett: The Making Of An American Capitalist

Buffett: The Making of An American Capitalist is a book that has been written with the intent of showing its readers just how Warren Buffett was able to amass the phenomenal wealth that he generated throughout his life, making him worth a mammoth $10 billion and counting. The book shows you how he started from scratch and kept picking up stocks and companies that he could invest in. This led to him becoming the owner of fortunes that are worth many millions.

His achievements led to him becoming a cult figure of sorts, who is looked upon as one who lives a life of various contradictions. The first of these is his phenomenal wealth against the modest lifestyle that he has. Being an incredibly successful investor, he still chooses to avoid the trading methods of modern Wall Street, which are considered to be a rage. Despite being a successful dealmaker, he still chooses to maintain the aura of a homely person.

The author has made use of three years of access that he had to Warren Buffett’s family, colleagues and friends while writing this book. The author has highlighted the tried-and-tested method that Buffett used to amass his wealth. This involves buying stocks in those companies that seem undervalued and unassuming. He would then wait for them to reach a stage of being successful, which would then bring him the necessary profits.

Be the first to review “Buffett: The Making Of An American Capitalist” Cancel reply