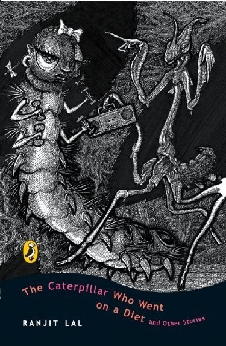 Caterpillar Who Went On A Diet And Other Stories

A hilarious glimpse of the complex lives of insects These fourteen scintillating stories are marked by Ranjit Lal’s usual combination of meticulous research, rollicking storytelling and fascinating characters. Nimbu, the caterpillar, resolves to go on a diet inspired by the stick insect. Cheeni Chor, the ant, discovers a refrigerator stuffed with goodies and is driven to rebellion. Ladoo Gulabjamun, one of the resident cockroaches of the famous Golden Thali Restaurant, decides to take on the management to impress his ladylove. You will also meet the body-building cricket, the dung beetles who like to party and a host of other insects who reveal their inner lives as never before and are true to both the insect and human world. Lal’s mastery of the world of birds and beasts, as captured in Crow Chronicles and The Life and Times of Altu Faltu, also extends to the world of insects, and this is perhaps his most enchanting and comical book to date. Rahul Dutta’s unusual and striking illustrations capture the magic of worlds Lal reveals.

Caterpillar Who Went On A Diet And Other Stories Reviews