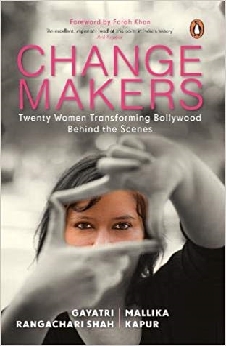 Blurb:
Since Bollywood’s earliest days, women have played a part in its success, both in front of the camera and away from it. Yet it has taken more than half a century for women to assert their presence in significant numbers in Bollywood. Today, Hindi cinema relies on a record number of women who work tirelessly, sometimes invisibly, to keep the world’s largest dream factory buzzing.
This book tells the story of twenty incredible women, many with no prior connections in the industry, who have carved successful careers despite significant challenges. They often work away from the public gaze-as studio heads, producers, directors, make-up artists, stylists, script writers, lyricists,editors, choreographers, stunt artists, set designers, and in the many other jobs that support the making of a movie. These women deserve to be applauded and their journeys acknowledged, as they transform Bollywood and in the process, create a new India.

Be the first to review “Changemakers: Twenty Women Transforming Bollywood Behind The Scenes” Cancel reply