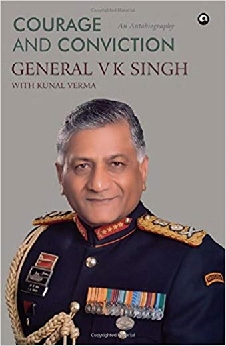 Courage And Conviction: An Autobiography

General V.K. Singh served in the Indian Army for forty-two years, retiring as Chief of Army Staff on 31 May 2012. His distinguished career saw him on the front lines of combat, in the Indo-Pak War of 1971 which led to the creation of Bangladesh and in Sri Lanka as part of the Indian Peace Keeping Force. Considered one of the world’s foremost experts in counter-insurgency operations, he is also known for the principled stand he took on many issues during his tenure, from arms procurement to the deployment of the army against the Maoists. Trained at the National Defence Academy and the Indian Military Academy, V.K. Singh served in regions (and in roles) crucial to India’s security. From his early days as company commander on the Line of Control in Poonch, to commanding elite formations, Victor Force in Jammu and Kashmir and the vast Eastern Command that shares international boundaries with Nepal, Bhutan, China, Myanmar and Bangladesh, to his experience of military operations and exercises such as Blue Star, Brasstacks and Trident, General Singh’s story makes for fascinating reading. Candid, compelling and occasionally controversial, this is the story of a straight-talking soldier not afraid to stand by his convictions.

Interesting Facts about the Book:
Gives the reader hitherto untold stories about the General’s experiences during the IPKF operation in Sri Lanka, the 1971 Bangladesh War with Pakistan, Operation Bluestar, and anti-insurgency operations in Kashmir and the Northeast.
Reveals information about bribery and corruption scandals in the armed forces during his tenure as Chief of Army Staff.
Gives the full story about various lobbies who tried to victimize him over the issue of his falsified date of birth.
Gives a worrying picture of how senior officers in the armed forces are constantly harassed by top bureaucrats.

Be the first to review “Courage And Conviction: An Autobiography” Cancel reply