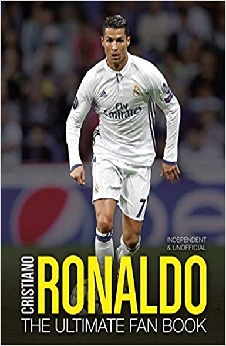 Cristiano Ronaldo: The Ultimate Fan Book gives a unique insight into the life and career of the three-times FIFA World Footballer of the Year, Cristiano Ronaldo. Fully revised and updated to his glorious summer of 2016 with victories in both the UEFA Champions League and the UEFA European Championship and filled with facts and stats, and 100 stunning photographs, you will learn about his childhood, his early career with Sporting Clube de Portugal in Lisbon, glory with Manchester United before making his move to Real Madrid. His outstanding skill, devastating pace, fantastic ball control and incredible power shooting with either foot. All in all, few contemporaries can match his talents. Written in a lively, buzzing style and filled with fun features, fantastic photographs and enlightening quotes, Cristiano Ronaldo: The Ultimate Fan Book celebrates the Portuguese maestro’s early life – he was named in honour of former US President Ronald Reagan – and his career on and off the pitch. All in all this is a highly entertaining insight into a football legend.

Be the first to review “Cristiano Ronaldo: The Ultimate Fan Book” Cancel reply