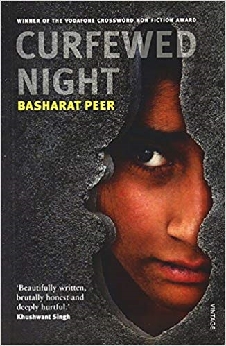 Since the independence of India, Kashmir has been a major concern for not just India but also the world. The issue of Kashmir still is a crucial issue discussed across forums in the global arena and is one of the major hindrances in improving relationship with India’s neighbour and kin of one time. Much has been written about Kashmir and the separatist movement in Kashmir. But the beautifully scripted account of the brutality with which the separatist movement is carried on till date has no precedence. The book, Curfewed Nights, gives an honest, crude, and truthful account of what goes on in the paradise of India which is under the spell of the separatist movement.
The author of the book, Basharat Peer, being a Kashmiri himself has related to each and every detail provided in the book from the first hand experiences gathered by him. Since independence of India, many Kashmiri youths have been mesmerised by the terrorism to the extent that they want to join the terrorist organisations even without thinking about their families or themselves. They have illusioned godfathers in the leaders of such terrorist outfits. In fact, the author was sent out of Kashmir by his family, just to keep him away from these painful romances with the militants.
The book, Curfewed Night, has a lot of heart rending accounts of how a mother watches her son who is forced to hold an exploding bomb or how a poet discovers his religion when his entire family is killed or how the politicians are tortured inside the refurbished torture chambers or how villages have been rigged with landmines which kills innocent civilians, and how temples have converted into army bunkers while ancient Sufi shrines have been decapitated in bomb blasts. This painful saga of humanity and human crucifiction in the name of religion and jihad was by RHI in the year 2009. The book is available in paperback.

Be the first to review “Curfewed Night” Cancel reply