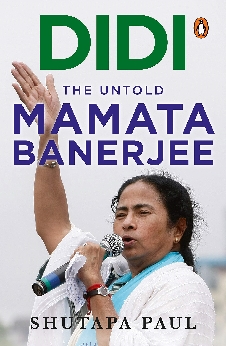 Mamata Banerjee, with her unique style of politics, was able to defeat the formidable three-decade-old Left Front Government in 2011. Exploring her struggles and achievements, Didi opens a window to the life and times of one of the most dynamic politicians of our country.
‘The general elections of 2019 can see [Mamata Banerjee] play kingmaker . . . She is the only regional leader who can claim to have that kind of clout. Jayalalithaa is no more and Nitish Kumar has changed over to the NDA. The year 2018 also witnessed the demise of another pedagogue of Dravidian politics, K. Karunanidhi. With the Congress showing signs of resurgence, and regional parties agreeing to forge a Federal Front, Mamata is more than aware that if she gets her electoral mathematics right, she could play a decisive role in the next Lok Sabha polls-maybe even stand a chance at prime ministership.’

Be the first to review “Didi: The Untold Mamata Banerjee” Cancel reply