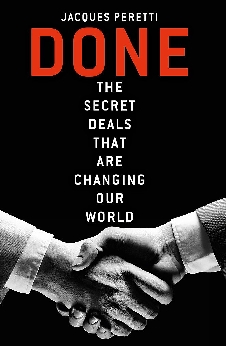 Done!: The Secret Deals That Changed Our World

The culmination of forensic investigation and first-hand accounts from the people involved in making the deals which changed the world and our mind-set as a society. What if the way we understand our world is wrong? What if it isn’t politicians and events that shape our lives, but secret deals made by people you’ve never heard of? This book tells the story of 12 secret deals that changed the world and revolutionized everything we do, including money, the food we eat, what we buy and the drugs we take to stay well. These deals never made the news: they were made high up in boardrooms, on golf courses and in luxury cars: each sealed by a handshake that would change the world. This is the story of those 12 handshakes. the chapters include the Deal to Kill Cash, the Deal that Turned Gambling into Economic Policy, the Decision that Invented “Obesity”, the Decision that Medicated Modern Life, the Lord of the Rings Deal: Five Companies to Rule us all and the Robot Swap ? the Deal that Made us Robots and Robots the Boss and more.

Be the first to review “Done!: The Secret Deals That Changed Our World” Cancel reply