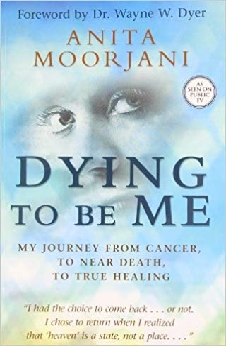 Dying To Be Me: My Journey From Cancer, To Near Death, To True Healing

Dying to be Me is about a woman’s journey of self-discovery and how she learnt to utilise the power within her to cure herself from cancer. The author, Anita Moorjani, suffered from cancer for around 4 years and her body was slowly giving up as each of her organs started giving up. As she was at what seemed like her last few moments on earth, she went through a strange near-death experience that brought her to a moment of sudden insight.
Anita has passed out and when she regained consciousness, she had figured out the reason for her ailment. When she woke up she discovered that she had been cured of her cancer almost instantaneously and was able to leave the hospital in a matter of weeks. In this book she tells readers the story of her journey from her birth, to the edge of death to and life after her revelation.
The author was born in to a conventional Hindu household and lived mostly in a British and Chinese society. She was obligated to follow various customs since her childhood and in her attempt to please others she ignored her potential. During her time of near-death she realised all of this and more and she writes about all the pearls of wisdom she gained about healing, illness, fear, ‘being love’ and the greatness of humanity. Dying To Be Me was published by Hay House in 2012 and is available in paperback.
Key Features:
Dying to be Me is the story of an epiphany of a woman who survived cancer.

Dying to Be Me Reviews

Be the first to review “Dying To Be Me: My Journey From Cancer, To Near Death, To True Healing” Cancel reply