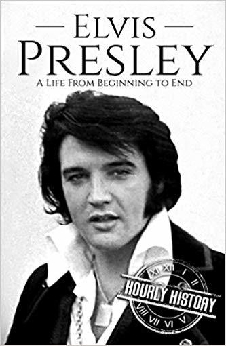 Elvis Presley: A Life From Beginning To End

Elvis Presley
Elvis Presley was much more than a cultural icon; he was a reliable barometer of the world he grew up in. Long before the cultural revolutions of the ?60s and ?70s, Elvis was sparking a dynastic change of hands in American society. And by his own admission, much of it was by accident. Whenever his performances caused a stir, Elvis was always the first to ask what all the fuss was about. When questioned if he was trying to provoke a response from his audience, Elvis innocently replied that he was just doing what came naturally.
Inside you will read about…
– Elvis and His Twin- That?s All Right- Presley?s Controversial Rise- Elvis Joins the Army- Comeback in Las Vegas- Last Years and DeathAnd much more!According to Elvis, as much as James Dean was a ?rebel without a cause,? he was a rebel completely by accident. If we believe him, everything he did that led to his rise to stardom was just some sort of cosmic alignment of happenstance. Elvis claimed that when he went into Sun Records to record his first song, he wasn?t looking to become famous; he maintained that he just wanted to record a song for his mom?s birthday. This book will let you decide for yourself as you learn about the life, the legend, and the unmistakable icon?Elvis Presley.

Be the first to review “Elvis Presley: A Life From Beginning To End” Cancel reply