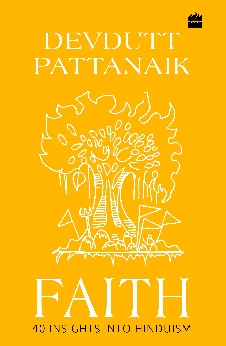 Why are Hindus so ritualistic? Why do they worship idols? Were Hindus always casteist? Are Hindus supposed to be vegetarian? Is divorce permitted according to Hinduism? Why is a Hindu prayer different from a Muslim or Christian prayer? Did the arrival of Muslim invaders a thousand years ago destroy Hindu culture? Answering key questions on Hindu philosophy and associated Indian history in simple, lucid, engaging ways, and exploring the often curious customs and beliefs that are an intrinsic part of the Hindu faith, Devdutt Pattanaik’s latest book is a treasure house of information on the complex tenets of Hinduism. For many a curious reader, Faith: Understanding Hinduism will prove to be a delightful and eye-opening introduction to the intricacies of one of the world’s most practiced religions.

Be the first to review “Faith: 40 Insights Into Hinduism” Cancel reply