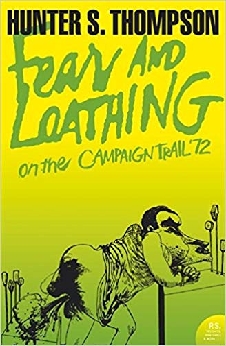 Fear And Loathing On The Campaign Trail ?72

The best, the fastest, the hippest and the most unorthodox account ever published of the US presidential electoral process in all its madness and corruption.
In 1972 Hunter S. Thompson, the creator and king of Gonzo journalism, covered the US presidential campaign for Rolling Stone magazine alongside the establishment newsmen of Washington. The result is a classic piece of subversive reportage and a fantastic ride on the rollercoaster of Hunter’s uniquely savage imagination. In his own words, written years before Watergate: ‘It is Nixon himself who represents that dark, venal and incurably violent side of the American character almost every other country in the world has learned to fear and despise.’

Fear and Loathing on the Campaign Trail '72 Reviews

Be the first to review “Fear And Loathing On The Campaign Trail ?72” Cancel reply