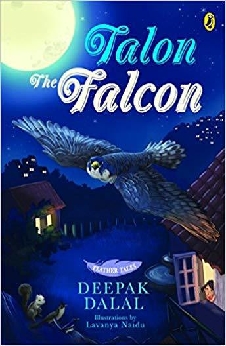 No wingbeat, no heartbeat, no freedom, no life?A caged bird’s lament
Talon is a peregrine falcon?those that are hunters and the fastest creatures in the skies. But when locked in a cage, his wings stilled forever, Talon’s mighty heart and spirit are broken. He bemoans the loss of his wings, crooning the song all caged birds sing.
No bird or squirrel anywhere in the world would ever dream of rescuing a falcon. But in the Rose Garden lives a squirrel like no other. Shikar the squirrel, a most kind-hearted creature, is friends with the birds of the garden. His tiny heart bleeds for Talon and the terrible fate that has befallen him. And late one night, Shikar and his bird friends mount a daring rescue attempt like no other.

Be the first to review “Feather Tales: Talon The Falcon” Cancel reply