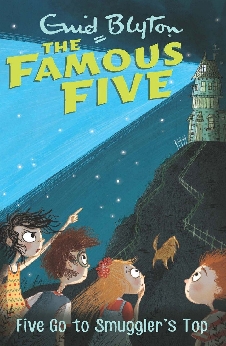 Five Go To Smuggler’s Top: 4 (The Famous Five Series) is the fourth installment in Enid Blyton’s most popular Famous Five series. The Famous Five consists of Julian, Dick, Anne, George and George’s pet dog Timothy. Julian, Dick and Anne are brothers and sister while Georgina is their tomboy cousin, who insists that everyone calls her as George. The trio often visit George at Kirrin Cottage and set out together on many adventures often.
Julian, Dick and Anne are once again at Kirrin Cottage with George and her parents, their uncle Quentin and aunt Fanny. All is well until the big ash tree in the garden falls down and destroys the top floor of Kirrin Cottage. Mr Lenoir, one of uncle Quentin’s acquaintances invites them along to stay at his house till Kirrin Cottage is repaired. Initially George refuses as she can’t take Timmy along with her but agrees later on after having hatched a plan to smuggle Timmy into Mr Lenoir’s house. Soon the Famous Five are at Castaway Hill where Smuggler’s Top, Mr Lenoir’s house is situated. There they meet Mr Lenoir’s stepson Sooty Lenoir, who also happens to be a friend of Julian and Dick. As the Famous Five learn about the marsh and fog that surrounds Castaway Hill, they also learn about the numerous secret doors and the network of passageways inside the hill that was used by smugglers once upon a time. As the possibility of smugglers still present at Castaway Hill increases, the Famous Five must find both Sooty and Uncle Quentin who suddenly disappear.
Five Go To Smuggler’s Top: 4 (The Famous Five Series) was published as 4th edition in 2007 by Hachette Children’s Books and is available in paperback.
Key Features:
Five Go To Smuggler’s Top: 4 (The Famous Five Series) is the fourth installment in the popular Famous Five series. A engaging tale of suspense and adventure that will keep you hooked to the very end.