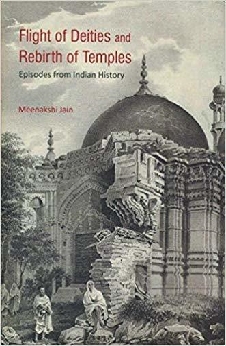 Flight Of Deities And Rebirth Of Temples: Episodes From Indian History

Meenakshi Jain’s latest book chronicles the destruction of temples, Hindu, Buddhist, and Jain, over the centuries at the hands of mostly Islamic invaders, and the attempts made, where possible, by the faithful to preserve the deities by ferreting them out of the temples before the marauders came to destroy temples and idols. These attempts succeeded sometimes, and it would take years, decades, or sometimes, even centuries, for those idols to be retrieved and returned to their rightful place. In many cases, however, the idols were lost forever.

Wherever temples were destroyed, there were consistent attempts to resurrect them and to revive the practice of worship there, but the scale was always diminished, the spirit subdued, a pall of fear hovering the faithful like a shroud, the prospect of a second, third, fourth round of destruction never far away.

In some cases, like Kashmir, even the memory of temples destroyed has faded. While the rise of British colonialism would wreak further untold havoc on the economy and the spirit of the nation, the one good that seems to have come out from colonialism was the work done by British archaeologists in uncovering and documenting scores of accounts of temple destruction.

After independence, any hopes of a revival of a faith suppressed for a millennia would soon be cruelly crushed. Between the criminal apathy shown by the Archaeological Survey of India, a rapacious state that took over the control and management of Hindu temples, starving them of funds and looting their lands, and an educational system that instills a deep sense of hatred of Hinduism among Hindus, it may not be an exaggeration to state that the final nail in Hinduism’s coffin, in a manner of speaking, has been planted.

Flight of Deities and Rebirth of Temples Reviews

Be the first to review “Flight Of Deities And Rebirth Of Temples: Episodes From Indian History” Cancel reply