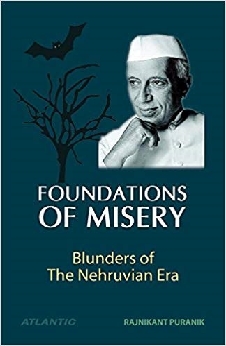 Foundations Of Misery – Blunders Of The Nehruvian Era

Foundations of Misery focuses on the blunders of the Nehruvian era, many of which still affect and vitiate India’s present. It is hoped that once there is an enlightened understanding of the past, free from the pervasive fiction, India would be better able to tackle its present and future. The book attempts to unravel the mystery and the truth in-depth on why India remains a poor, pathetic, third-rate, third-world country. How’s it that India got so left behind? What was it that India did, or did not do, after independence, that everything is so abysmal and pathetic. Why an overwhelming majority of millions of Indians continue to be condemned to a life of unmitigated misery.

Foundations of Misery - Blunders of the Nehruvian Era Reviews