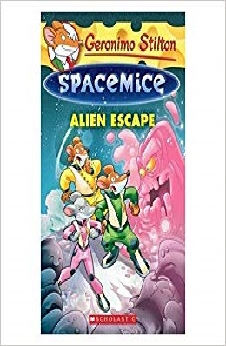 In this book, which is the first in the series, readers will get to meet a new Geronimo Stilton in a world parallel to that of Earth: Geronimo Stiltonix. This little space mouse is busy flying the spaceship Mouse Star 1 through the cosmos. During his special journey, he discovers many new planets and meets new aliens. But suddenly, the poor mouse finds that his spaceship has got into a soup and that unless the batteries of its engine are replaced, he could well explode into bits with the ship.

Geronimo Sitltonix realises that he must hunt for a rare element if he is to find a way out of the engine trouble. He is tensed obviously but finds some relief when some apparently friendly aliens say that they would help him in the task. But are these aliens truly trustworthy and as friendly as they appear to be is a mystery solved in the rest of the book.