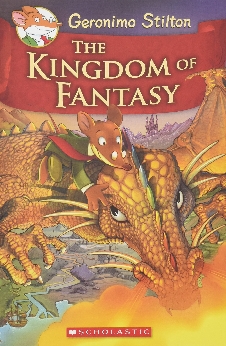 Geronimo Stilton – The Kingdom Of Fantasy

Geronimo Stilton arrives at work one fine morning to find the office in a complete uproar. The minute Geronimo sets his paw in the office, he realises this is not going to be a good day. His staff is complaining about things and everything is in disorder. Worst of all, he has a pimple on his snout. When he heads home after work, he is struck by a lightening and the electricity goes off. He has to find his way to his attic in pitch dark. After several mishaps like stepping on a roller skate and stepping onto a rake, he discovers a magical golden staircase there. He steps into the Kingdom of Fantasy. He is helped by Scribblehopper, a frog, who acts as his guide. His mission is to save the Queen of Fairies.

He has to face many dangerous creatures like scorpions, sea serpents, pixies and creatures he did not know existed. He finds he has to save his own tail in addition to the Queen.

Will Geronimo complete his adventure successfully or perish in the attempt?

The Kingdom of Fantasy Reviews