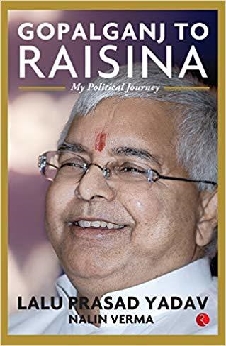 Few Indian politicians can match the mass appeal and charisma of Lalu Prasad Yadav. As the leader of a political party, as the chief minister of Bihar and as Union minister, he blazed a trail, bringing a dash of rustic wit and flair into the nation political narrative of drab ‘political correctness’. although essentially a regional leader, his influence has extended beyond his home state, often impacting important political developments at the centre. Gopalganj to raising road is the journey of India’s most colourful political leader. From his humble origins in phulwaria village to his remarkable rise as Railway minister, the narrative relives the twists and turns and the highs and lows of his life. In doing so, it reveals little-known facets of many inflection points in the nation history: The emergency, how he got V.Br. Singh to implement the explosive mandal Commission recommendations, the arrest of veteran BJP leader L.K. Advani during the latter Rath Yatra, Sonia Gandhi’s decision to not lead the up a government, his acceptance of Manmohan Singh’s candidature for prime Ministership in 2004, and his dramatic relationship with friend-turned-foe nitish Kumar. A political potboiler as never seen before, Lalu Prasad yadav’s autobiography is the most important book if one has to understand the evolution of the politics of the Dalits and the marginalized.

Be the first to review “Gopalganj To Raisina Road” Cancel reply