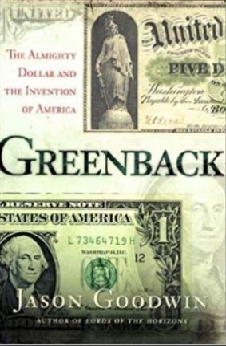 Money has always been at the heart of the American experience. Paper money, invented in Boston in 1698, was a classic of American ingenuity – and American disregard for authority and tradition. With the wry and admiring eye of a modern Tocqueville, Jason Goodwin’s biography of the dollar gives us the story of its astonishing career through the wilds of American history.
Looking at the dollar as a form of art, a kind of advertising, a reflection of American attitudes, and a builder of empires, Goodwin shows us how the dollar rolled out the frontier and peopled the Plains; how it erected the great cities; how it expressed the urges of democracy and opportunity. And, above all, Goodwin introduces us to the people who championed – or ambushed – the dollar over the years: presidents, artists, pioneers, and frontiersmen; bankers, shady and upright; safecrackers, crooks, and dreamers of every stripe. It’s a vast and colorful cast of characters, who all agreed on one thing: getting the money right was the key to unlocking liberty and the pursuit of happiness.
Greenback delves into folklore and the development of printing, investigates wildcats and counterfeiters, explains why a buck is a buck and how Dixie got its name. Like Goodwin’s Lords of the Horizons, another story of empire, Greenback brings together an array of quirky detail and surprising – often hilarious – anecdote to tell the story of America through its best-beloved product

Be the first to review “Greenback” Cancel reply