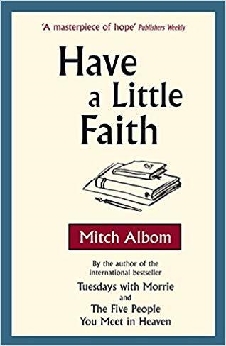 Have A Little Faith

Have A Little Faith, according to the introduction, was thought of by the writer in a rather unusual way: when his rabbi requested him to deliver the eulogy at his funeral. Mitch Albom gladly conceded and thus began a series of insightful interviews of the rabbi, named Lewis. The interviews reveals a lot about not just Lewis as a rabbi (who is affectionately also referred to as the “Reb”), but also as a man. The rabbi, seems to have embraced and accepted his death and Albom, through the interviews, learns a lot about faith and the presence of a higher power.
Meanwhile, Albom also comes across a young Pastor in Detroit, named Pastor Henry Covington. The pastor, who is an ex-convict and a former drug-peddler, preaches to the poor and the lesser privileged in a run-down church, where the roofs leak, when it rains. His interactions with the two men and their beliefs, drawn from interviews as well as sermons, is the basis for this book. Have A Little Faith questions and explores how having faith makes all the difference in the world.
Have A Little Faith was published as export edition by Sphere in the year 2011. It is available in paperback.
Key Features:
Henry Covington’s account of the church through the book inspired “A Hole In The Roof Foundation”, that is dedicated to helping faith-groups through specially-designed programs for the homeless.
The book inspired a movie adaption, which was released in the year 2011. Unexpectedly, after merely a year of the book’s release, Pastor Covington died.

Have a Little Faith Reviews

Be the first to review “Have A Little Faith” Cancel reply