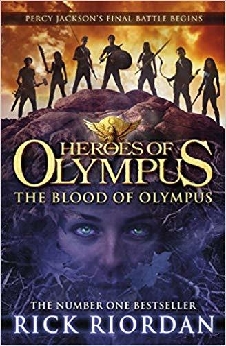 The Blood of Olympus is the fifth edition in the acclaimed series ‘Heroes of Olympus’ by Rick Riodan, an American author. All books in the series have been rated number one in the New York Times bestselling list. It is a story of conquers and quests of Greek and Roman demigods of the Agro 2. During their endeavors in battles, the demigods didn’t settle for anything less than success. However, their encounter with earth mother Gaea, who is mightier than any rival the demigods ever faced, may have something else in store for them. Her army consists of giants at the peak of their strength.
Gaea expects sacrifice of several crew members during the Feast of Spes in Athens because she needs blood to wake up, which terrifies the demigods. Gaea must be stopped, and the demigods plan to use secrete weapons and take support from Athena Parthenos. The drama gets intense as it appears impossible to win against Gaea army for demigods. There is no other option but to fight and prevent Gaea from waking up.
About the Author:
An American Author who has figured in New York Times bestselling authors’ list several times, Rick Riordan is most famous the world over among young readers for having written the Percy Jackson & the Olympians series, the Magnus Chase series and the Kane Chronicles. Millions of kids have grown up reading Rick’s books.

The Blood of Olympus Reviews

Be the first to review “Heroes Of Olympus Book : The Blood Of Olympus” Cancel reply