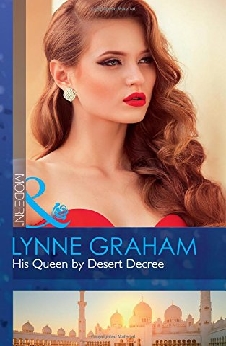 His Queen By Desert Decree

Wife?by royal declaration!
Language teacher Molly Carlisle is furious when she’s kidnapped by an impulsive young sheikh and taken to the kingdom of Djalia. Until she meets her abductor’s brother and his commanding charisma sends a shockwave of need through her?
King Azrael fights hard to resist the temptation of Molly’s bountiful curves?especially when a sandstorm strands them overnight in the desert. To protect her reputation from scandal Azrael declares them secretly married?only to discover his tactical announcement is legally binding?Molly is now his Queen! And Azrael is determined to claim his wedding night?
Wedlocked!
Conveniently wedded, passionately bedded!

His Queen by Desert Decree Reviews