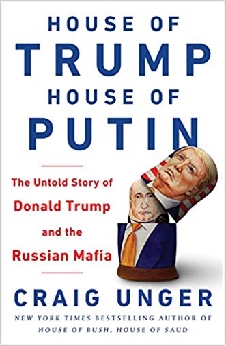 House Of Trump, House Of Putin

The explosive, news-breaking story of how Putin’s Russia came to control the White House. Much has been written about the ties between President Donald Trump and Vladimir Putin. Most reports focus on Russia’s interference in the presidential election, but the true extent of Trump’s collusion with the Russians is only just beginning to be understood. As the world wakes up to one of the biggest political scandals of the modern era, Craig Unger is uniquely placed to expose the truth behind Trump’s long-running relations with the Russian state. In his sweeping investigation, Unger reveals how Trump became a target of Vladimir Putin’s decades-long mission to undermine Western democracy and the geopolitical hegemony of the United States, a mission for which Putin and his hand-selected group of oligarchs and mafia kingpins had ensnared Trump long before he ran for office. Drawing on original research, exclusive sources, anonymous tips and leaked and never-before-seen documents, Unger is the first reporter to unravel Trump’s long, tangled history with Vladimir Putin and the Russian mafia and fully grasp the significance of Russia’s ambitions to destabilise the West. House of Trump, House of Putin is both a page-turning thriller and an epic tale of intrigue, drama and shady dealings, reported from the frontline of a new Cold War.

Be the first to review “House Of Trump, House Of Putin” Cancel reply