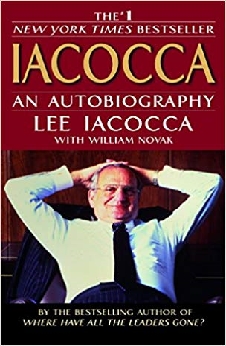 Iacocca: An Autobiography is the story of Lee Iacocca. He is an American businessman in the car industry and is known worldwide as the famous man who engineered various famous Ford cars. He is also for his personal skills, determination and acumen in reviving Chrysler Corporation from the brink of bankruptcy, in such a way that the world was left astounded at the after effects.
The book contains different phases of Lee Iacocca’s life starting from his childhood to the various struggles and decisions he was faced with. Iacocca was from an Italian-immigrant family. His dreams of joining the army during the second World War was lost due to the rheumatic fever. Being a smart student, Iacocca joined the Lehigh University and finished the course in eight semesters. After getting a University degree, he was offered a job in the army. But soon after, he came into contact with the Ford company and began working there diligently, only to be kicked out on his 54th birthday. The book also tells you about the numerous challenges that Iacocca had to face when the Chrysler Corporation was on the brink of bankruptcy and how he managed to get a loan from the government under various conditions in order to save Chrysler and the way he turned around Chrysler on to the path of success.
Iacocca: An Autobiography was published in 1986 as a Reissue Edition by RHUS and is available in paperback.
Key Features:
The success story of one of the most prominent automobile engineers of all time, Lee Iacocca.
The book also talks about the necessary law policies that needs to be implemented for car users.

Be the first to review “Iacocca: An Autobiography” Cancel reply