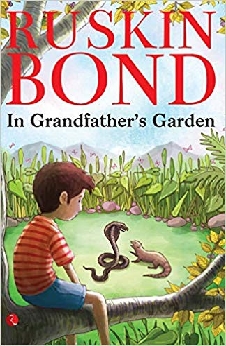 Months later, the book appeared, printed privately of course. And there was my photograph and a photograph of the dead leopard after it had been hunted down. But the local printer had got the captions mixed up. The dead animal’s picture earned the line: ‘Well-known author Ruskin Bond.’ My picture carried the legend: ‘Dreaded man-eater, shot after it had killed its 26th victim.’
Playful snakes, monkeys, crocodiles and old favourites like the Grandfather, Aunt Mabel, Uncle Ken, Ms Bun, Ranji, Foster and Ruskin Bond himself, come together in this delightful and irresistible collection. From a belt that gets hooked on to another person’s luggage and snakes admiring themselves before a dressing table, to a priest reading out the service for burial at sea during a funeral inside a church?Bond is at his effortless best in this anthology.
Peppered with his signature wry humour and generous dose of wit, In Grandfather’s Garden will make you see the funny side of things in life, bringing laughter to even those who seldom smile.

Be the first to review “In Grandfather’s Garden” Cancel reply