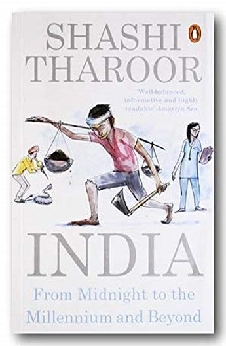 India: From Midnight To The Millennium

“Few books in recent years, if any, offer such a comprehensive overview of what ails India, its politicians and its people; and few writers, apart from Nirad Chaudhury and V. S. Naipaul, benefit so obviously from the perspective Tharoor offers, that of an Indian with a profound empathy for his native culture, combined with the insight made possible by following India’s progress from afar.”
–New York Times
“A hard-hitting, powerfully analytical and supremely articulate new book. . . . Tharoor discusses the ‘flawed miracle of Indian democracy’ from various angles, opting for a take-no-prisoners approach as he criticizes politicians, unpacks layers of misguided governmental policies and exposes the atavistic tendencies of special-interest pols.”
–Newsday
“Tharoor looks back at his country’s first 50 years of independence, describing its challenges (illiteracy, poverty, sectarian violence and the ever-present caste problem) and its triumphs (a thriving democracy, a burgeoning economy) in lively, informative prose. He is particularly adept at describing all that India and Indians are not–not the same ethnicity, religion or language–to arrive at the nation’s essence: that ‘the singular thing about India was that you could only speak of it in the plural’.”
–Seattle Times

Be the first to review “India: From Midnight To The Millennium” Cancel reply