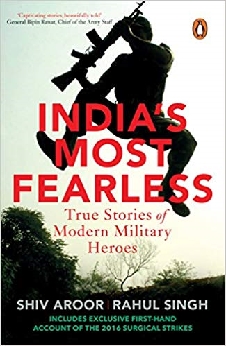 The Army major who led the legendary September 2016 surgical strikes on terror launch pads across the LoC; a soldier who killed 11 terrorists in 10 days; a Navy officer who sailed into a treacherous port to rescue hundreds from an exploding war; a bleeding Air Force pilot who found himself flying a jet that had become a screaming fireball . . .
Their own accounts or of those who were with them in their final moments.
India’s Most Fearless covers fourteen true stories of extraordinary courage and fearlessness, providing a glimpse into the kind of heroism our soldiers display in unthinkably hostile conditions and under grave provocation.

Be the first to review “India’s Most Fearless: True Stories Of Modern Military Heroes” Cancel reply